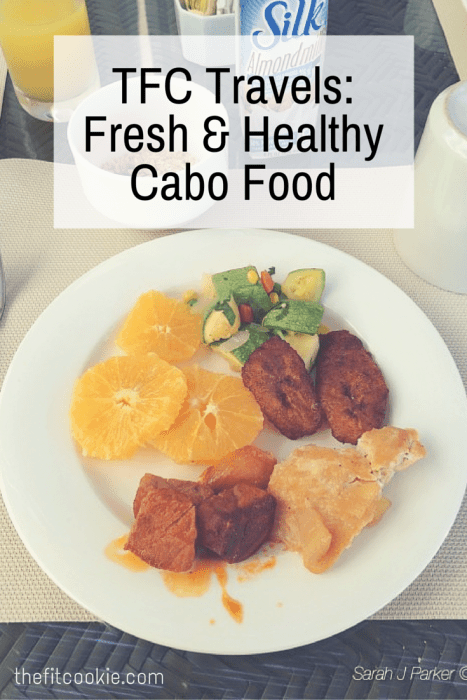 It’s time for another travel post! Are you sick of those yet 😉 I actually don’t think it’s possible for me to get sick of seeing other people’s travel photos (unless they’re extremely boring). It’s such a cool way to see the world around you and find out where you want to travel next.

I had a bunch of photos from our trip to Mexico and I wanted to share them in several smaller posts so it was easier to navigate. Today is about the food we had in Mexico. We ate mostly at our hotel so there aren’t too many restaurant “reviews” per se in this one. My last vacation post had some new travel workouts, go check those out! 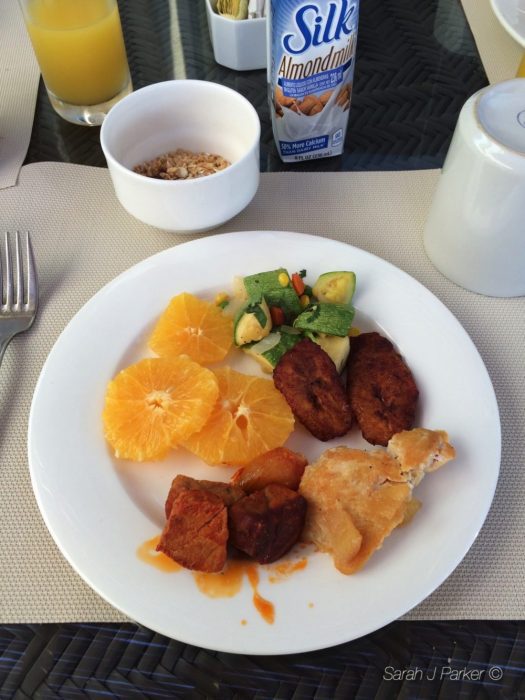 Here’s what a typical breakfast looked like for me: fruits, veggies, plantains, sometimes granola, and some type of meat (the one above was pork and chicken). Mostly clean but I did indulge in some treats. I really wanted to keep it pretty clean while I was on vacation so I didn’t have to try and break all kinds of bad habits when I got home. It worked! I enjoyed the food and didn’t end up with stomach problems and I actually lost a little weight (more about that in a later post).

One thing I noticed on this trip was that I had very few stomach problems at all. I was worried that I would have all kinds of stomach problems during this strip but it was smooth sailing. In fact, my stomach improved and felt better, even though I had some things with wheat in it!

I did some thinking and came to the conclusion that they certainly did not cook with soybean oil since fried foods didn’t bother me in the least. They must have cooked with some other kind of oil or lard. And most everything we ate was made by hand. Most of the food was fantastic and tasted great, and everything was fresh and homemade. Not much came out of a package or can.

My stomach was very happy on this trip except for one day something bothered my stomach (something with hidden dairy I suspect), but otherwise I felt great. I talked to a couple other friends who have traveled down to the Caribbean and Mexico and they said the same thing: their stomach felt better eating food from other countries!

I came back from our trip with a renewed appreciation for handmade and fresh food. It’s so easy to get sucked into eating from boxes when things get busy and hectic, but fresh is better for your body and digestive system. I am trying hard not to slip into some of my old eating habits since coming home. I really want my stomach to do better every day, not just on vacation. 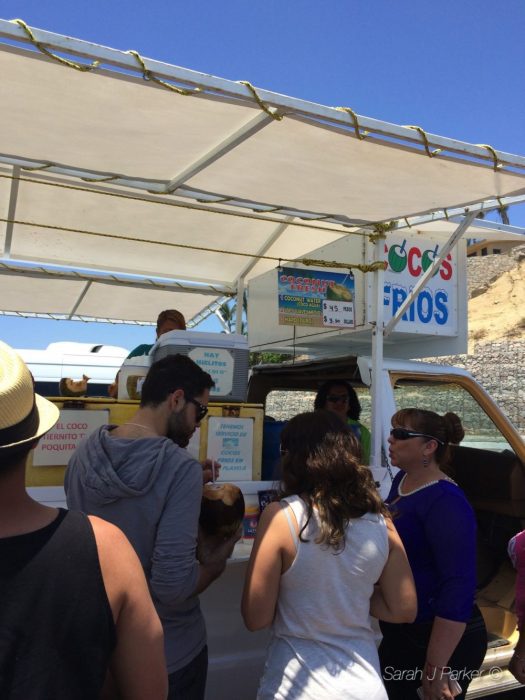 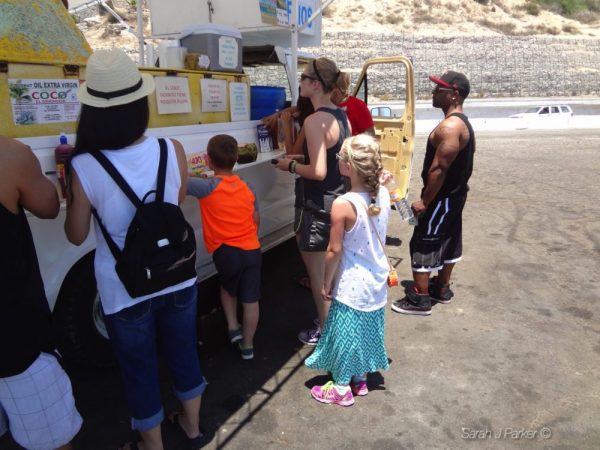 During our city tour we stopped by a coconut truck by Palmilla beach and got a coconut to eat. 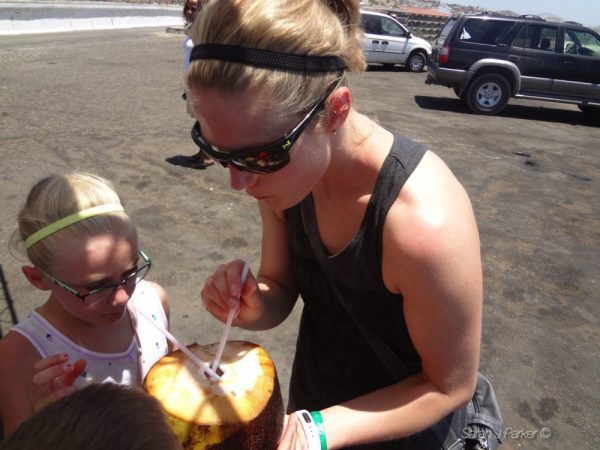 After we drank the coconut water (sooo good when it’s that fresh!!), we gave the coconut back to the guy and he cut out the flesh and put it in a bag for us. we sprinkled Tajin and fresh lime juice on it, shook it up, and ate it. It was amazing. I have never had coconut that fresh before, so it was fantastic. 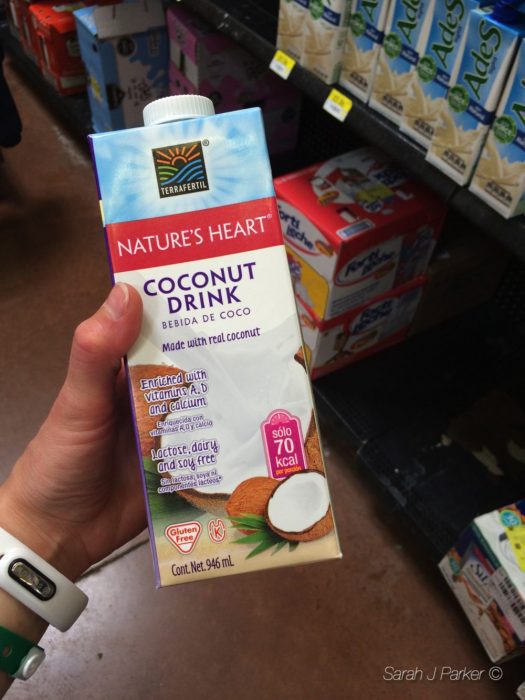 I found some non-dairy milk for my coffee at both Walmart and Mega. I love coffee but really like having milk with it. And I drank a lot of coffee down there! I was tired a lot from the heat so I probably drank more coffee than I should have… There were several espresso machines around the hotel and I mixed a couple shots of espresso with coconut milk in the morning and in the afternoon. 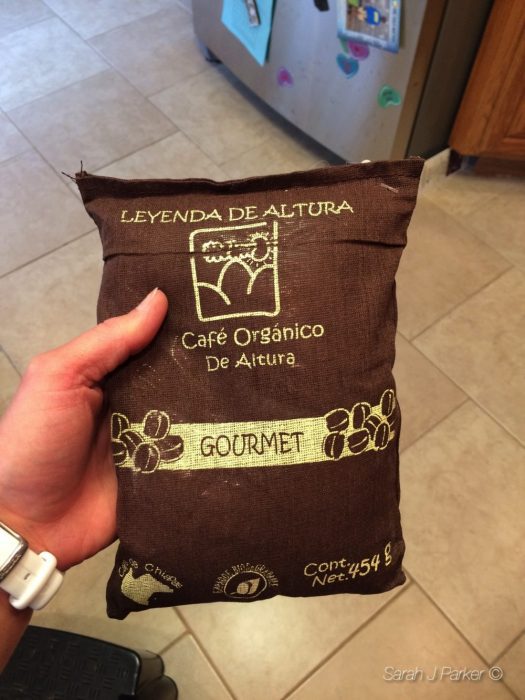 The coffee in Mexico was really good, though, even without milk. It was mellow and tasty, not acidic and bitter like the icky cheap stuff most hotels serve around here. Cheap coffee should be a crime….seriously. I bought some organic coffee to bring home that was really affordable from Mega.

This particular coffee is very light and mild roast, almost too mild for me. I mixed this with some super dark roast to get a good cup. 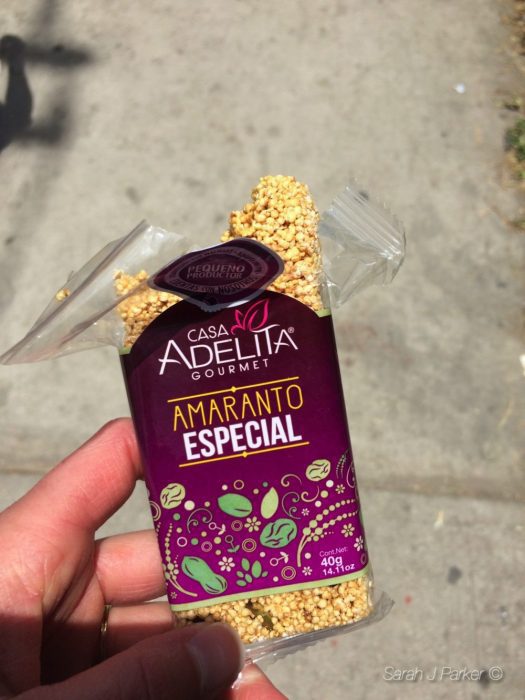 Amaranth trail mix cereal bar with honey and nuts/seeds. This one was pretty good! 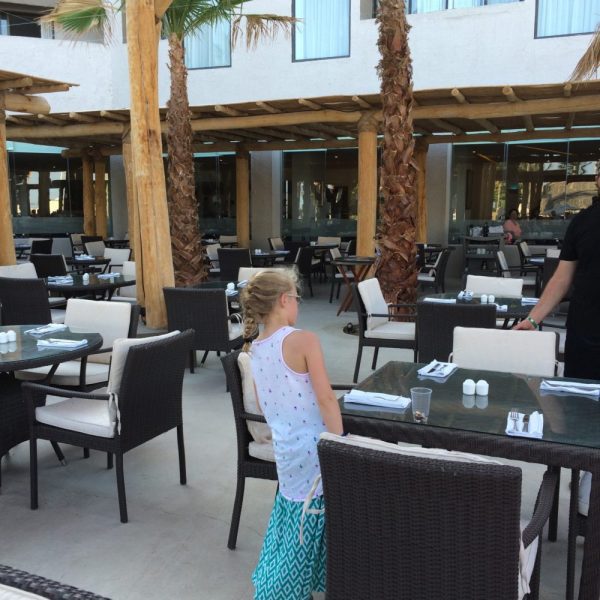 The outdoor dining area at our buffet, which was nice. When we were really hot we sat inside, but first thing in the morning and later in the evening sitting outside was nice. Our room was right above the kitchen, so the smell of food woke me up in the morning.

Interesting smells for sure, not the typical bacon and pancake cooking smells. Thursday morning there was menudo on the buffet, so that smell woke me up 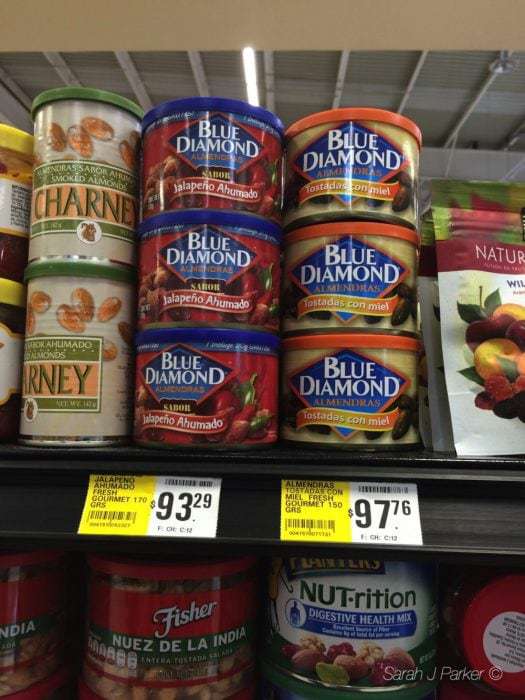 They had some of our favorites in different labels. Rather expensive though: that’s about $6 US 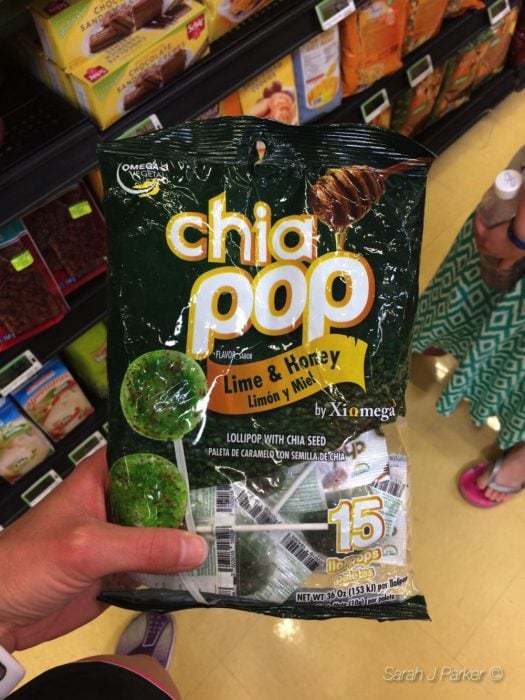 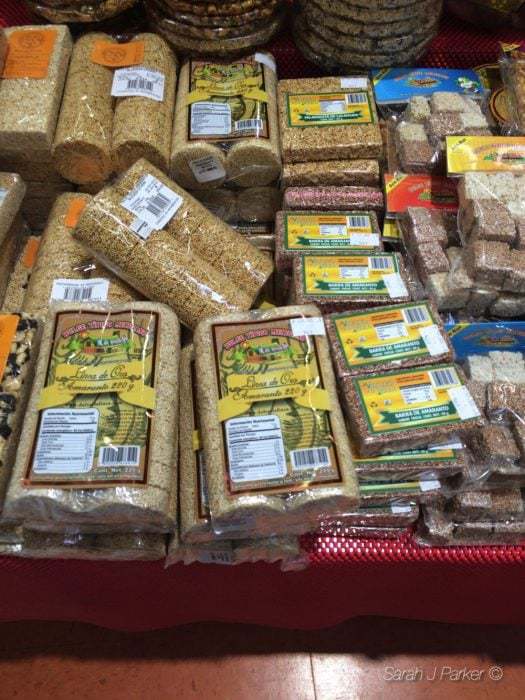 Amaranth products are very popular! Some of them are pretty good, but I bought some amaranth cereal that I didn’t like so I left it there. It had papaya flavor in it and that kind of ruined it for me 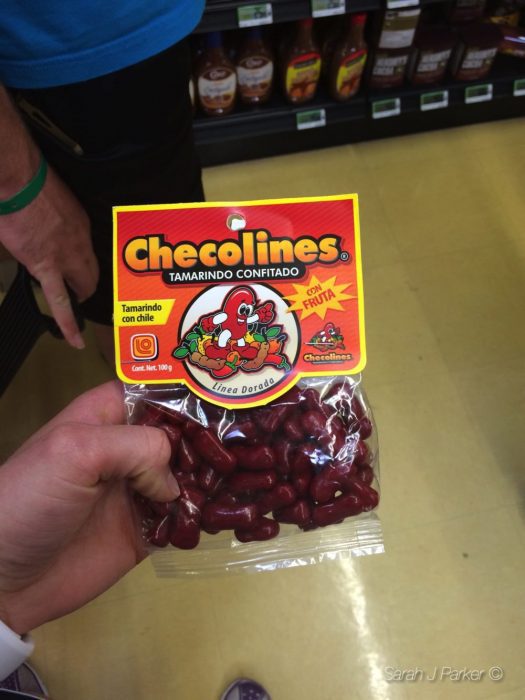 Tamarind chili candies that were a bit like sour/salty/spicy Mike and Ikes. None of us liked them much…and I usually love tamarind 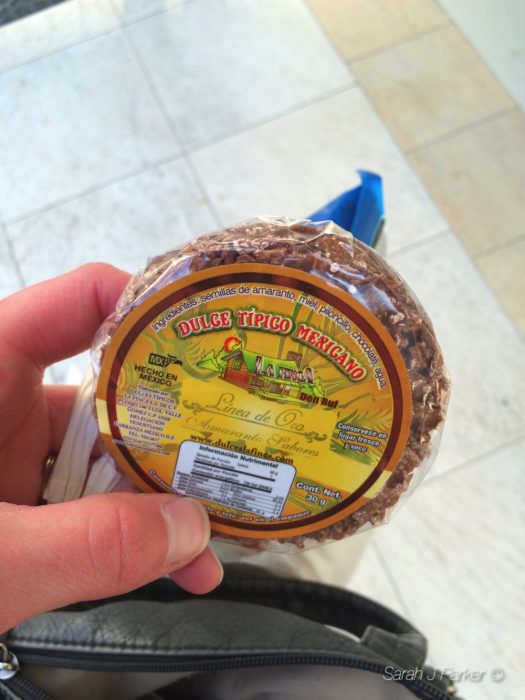 A chocolate cereal treat bar (circle?) with amaranth. It was yummy but super crumbly. I think half of this ended up on the floor 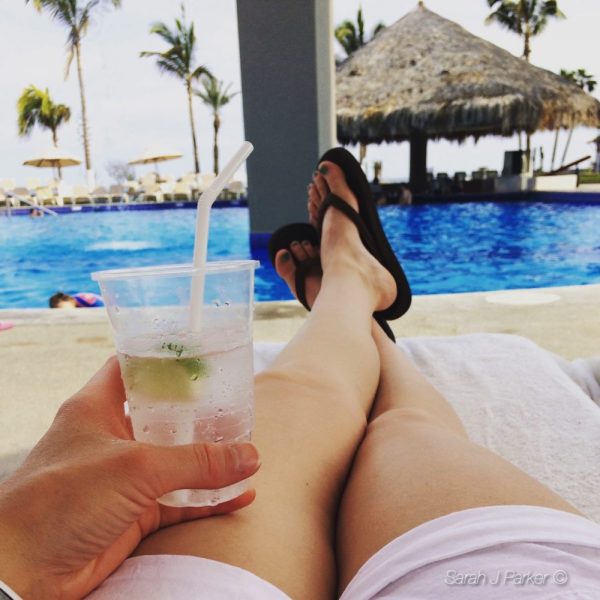 Sipping soda water and lime by the pool. I barely drank alcohol on this trip since it bothers my IBS. I mostly drank soda water and lime (which I love!) and had 1 or 2 virgin pina coladas. Something did bother my stomach that day, not sure if it was the tiny sips of tequila I had at the tasting or something in the pina colada…. I woke up at 1 am and had to take activated charcoal but was mostly fine after that. Stomach mysteries 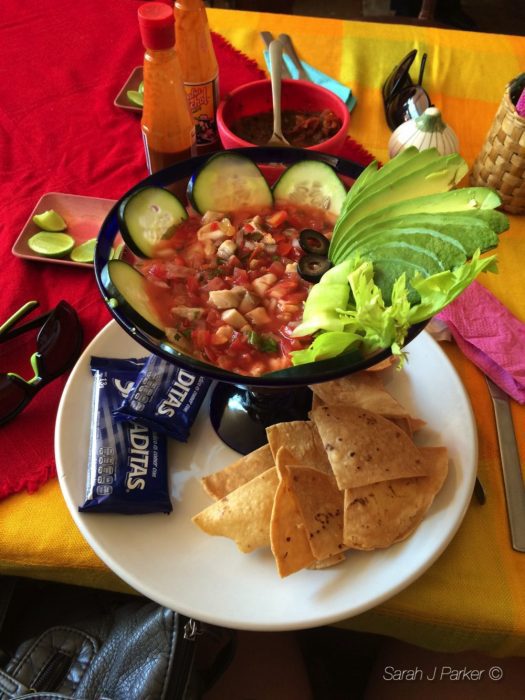 During the city tour we ate at Jasmine’s Restaurant in downtown San José del Cabo. The homemade chips and salsa were awesome! The salsa was made with fire roasted tomatoes. I ordered the ceviche and it came in this giant margarita glass. There was a lot there! This was the first time I had ceviche with celery in it, which I’m not a fan of. I prefer ceviche without celery, but it was still good. 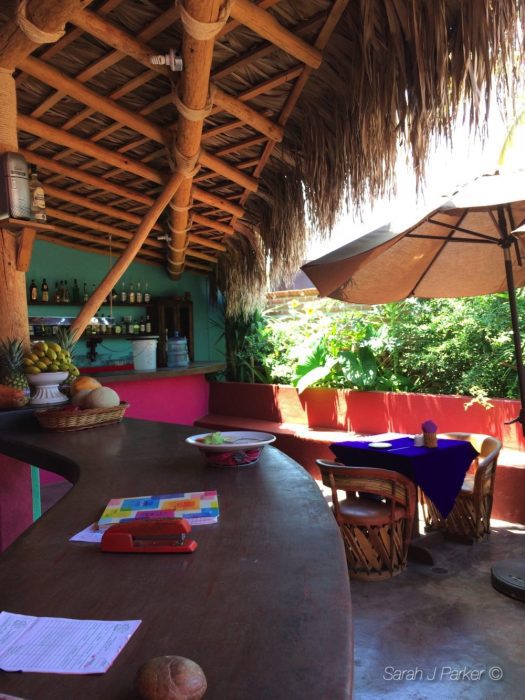 Jasmine’s was in an older part of town so it was in an older building that had rooms connected by open halls and courtyards. They did a fantastic job with the decor, I loved all the beautiful colors! 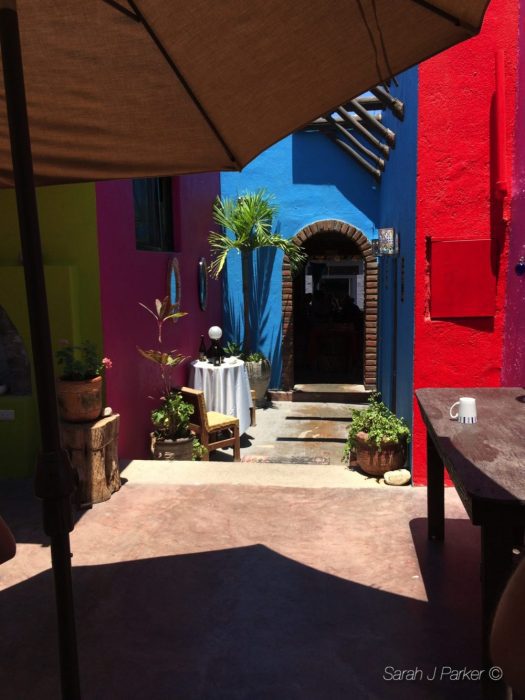 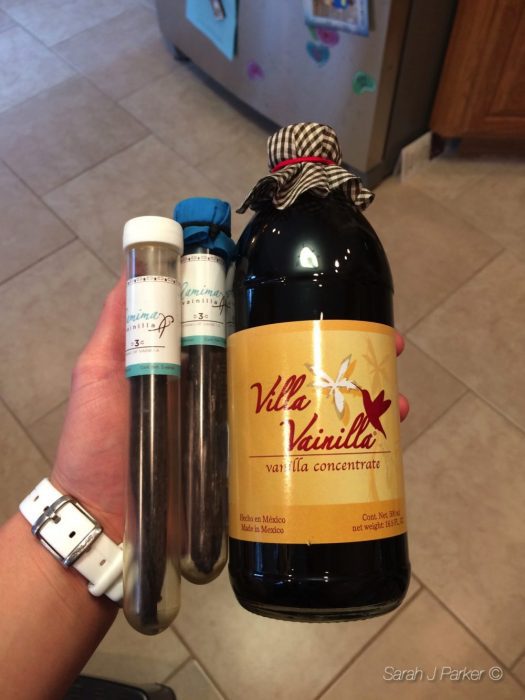 4 thoughts on “Fresh and Healthy Food in Mexico”