Looking for an allergy friendly brownie recipe? Make a batch of these Vegan One Bowl Fudge Brownies that are gluten free, nut free, and made with simple ingredients you probably already have in your pantry!

Hey friends! This Vegan one Bowl Fudge Brownie recipe is one of our reader favorites (and a family favorite!) from March 2014, so I’ve updated the text, recipe, and images.

But not to worry, it’s the same great recipe, just doubled and made with a 9×9-inch baking pan so it’s easier for people to follow and make. This recipe is one of my absolute favorites, I even used it as the base for my Mint Brownie recipe, too – it’s crazy good 🙂

And best of all, this recipe doesn’t have any strange ingredients like beans or avocado and not “healthified” (I want real brownies if I’m going to eat them!). These fudge brownies made with staples you probably already have in your pantry and it’s less mess since they are one-bowl brownies. Boom!

Some recipes are just buggers…

Take these Vegan One Bowl Fudge Brownies as a prime example: I love experimenting in the kitchen but I often have to deal with crazy recipes-gone-very-wrong since I have to replace ingredients due to our food allergies.

I originally started re-doing one of my favorite traditional brownie recipes, the classic Baker’s One-Bowl Brownies, but I quickly learned that simply re-making this recipe with gluten-free flour wasn’t going to cut it!

After several trial and errors, I came upon this amazing recipe you have before you, but before that batch, I failed a few times.

How to make vegan and gluten free brownies

These brownies are easy to make (almost fool-proof!) and are nice and crispy on the outside and gooey on the inside. If you prefer cakey-type brownies, then you will have to look for a different recipe: these are fudgy inside (my favorite!).

I used unbleached cane sugar in this fudge brownie recipe since we use unbleached sugar in our regular baking vs. bleached white sugar.

Using real sugar gives it that nice crust on top that I love so much! You can use granulated coconut sugar or regular granulated sugar here for the same results.

Using coconut sugar will give it a richer taste similar to using brown sugar, so you can use whichever you prefer in this recipe (coconut sugar or cane sugar).

For the updated version of this recipe, I baked my batch for 30 minutes and they were super soft and gooey. If you love seriously fudgy brownies, then 30 minutes is good for baking, but if you want them to firm up a little more, try baking these for 35-40 minutes, starting with 35 minutes then adding baking time 2 minutes at a time until you get the texture you want.

Just remember that these fudge brownies will firm up as they cool, so even if you want your brownies gooey, make sure you still allow your brownies to cool for about 15 minutes before cutting and eating them.

These egg-free brownies are still pretty amazing the next day, and maybe even better the next day!

Update on using different flours for our egg-free brownies

For quite a while I told people not to use different flour than sorghum or brown rice flour in this recipe because I had heard from some people that their batch didn’t turn out when made with a different type of flour.

But recently I had a ton of questions about whether this recipe will work with other flours and a friend shared that she tried it with gluten free all purpose flour with great success!

So I went ahead and tried half batches of this recipe made with 2 other kinds of flour in the same measurements, both turned out well!

As it stands, I still think these brownies have the very best texture when made with the brown rice flour or sorghum flour, but gluten free all purpose flour and wheat all purpose flour (if you’re not celiac or gluten intolerant) also work in this recipe in a pinch!

In the photo above, the vegan brownies made with gluten free all purpose flour are on the left while the wheat flour brownies are on the right.

I used a handy tin foil separator to make 2 half-batches of brownies to test the different flours in our regular glass baking pan. Worked pretty good!

Here’s what I found with my flour substitutes:

I made this recipe with the King Arthur gluten free all purpose flour and they turned out nicely. I used the same amount of flour as called for in the recipe, no changes made except for the type of flour.

I felt that these were more gooey in the middle, so I’d recommend baking for 40 minutes to get them to set more firmly. These have a beautiful crust on top and nice crispy edges!

I also noticed that with the gluten free all purpose flour that the brownies had a slightly gummy texture in the middle when they were warm due to the xanthan gum. But this went away when the brownies had completely cooled.

So I’ll try to do a few more tests with this recipe to get a better brownie texture with gluten free all purpose flour, but as it is, they aren’t too bad made with the King Arthur gluten free flour!

If you use the gluten free all purpose flour, I’d recommend letting them cool completely for the next texture until I can continue testing the recipe for better texture with this substitute.

A note on this: every gluten free all purpose flour blend is slightly different, I tested this with the King Arthur gluten free flour and the Bob’s Red Mill flour is pretty similar in how it bakes. But I’m not sure how other brands would do in this recipe.

I also tested a batch with regular wheat all purpose flour (we use Wheat Montana flour), which is great if you’re looking for an egg free, dairy free, or vegan brownie recipe and you’re not celiac or gluten intolerant.

They didn’t have as great a crust on top as the GF all purpose flour ones, but they still had a great fudgy texture inside and set up well once they were cooling.

So if you don’t have to avoid gluten, you can use regular all purpose flour in this recipe with no changes to the amount of flour or other ingredients!

Can I reduce the amount of flaxseed in this recipe?

Based off the recommendations of one of our readers, I tested these with half the ground flaxseed (1/4 cup instead of 1/2 cup) plus 1 Tablespoon of egg replacer powder (I used Bob’s Red Mill egg replacer powder) and they turned out great!

I haven’t tried making these completely without flaxseed yet, so I’m not sure how that would turn out. Though I bet they would turn out fine.

So if you don’t like the taste of flaxseed, you can use this swap: 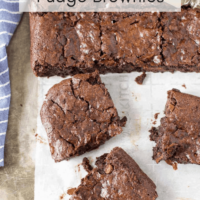