Disclosure: This post may contain affiliate links, I receive a small commission when you make a purchase using some of my links.

This delicious Creamy Chicken Corn Chowder is the ultimate allergy friendly comfort food! It can be cooked in both the Instant Pot and the slow cooker/CrockPot, plus it’s dairy free and gluten free.

One thing I haven’t posted very much of on The Fit Cookie is soup recipes. I’m not one for thin, brothy soups: I really love thick, creamy, and chunky soups and stews. Something that has substance!

I’ve been working on this amazing Creamy Chicken Chowder recipe for a couple of weeks, and this ticks all of my boxes for a good soup: it’s creamy, thick, filled with chunky ingredients like potatoes, corn, and bacon, and is pretty easy to make.

Our chowder recipe can be made in either the slow cooker or the pressure cooker, we included instructions for both methods. Plus this creamy chowder recipe is dairy free, gluten free, peanut free, and has no added sugars, so it fits many special diets.

Our Creamy Chicken Chowder is pretty easy to make, there are only a few steps to follow. For both the slow cooker and Instant Pot cooking methods, you’ll cook the ground chicken first, then dump all the ingredients into the pot and cook. Pretty simple!

In this recipe, I noted that the salt is optional. I added smoked salt to our recipe to add a great smoky flavor, but don’t add the salt until you’ve test tasted the soup first. Chicken broth has sodium in it, as well as the Creole spice, so make sure you test taste this chowder before adding the salt so it’s not too salty.

Instead of heavy cream in this chicken chowder, we used canned coconut cream to make this dairy free. It works great! And don’t worry: you can’t taste any coconut flavors in this recipe.

If you choose not to use canned coconut milk or coconut cream in this recipe, you can try using another thick non-dairy milk, but it won’t be quite as creamy.

Whether you’re cooking this in the Instant Pot or the slow cooker, you’ll want to make sure that you don’t add the coconut milk or coconut cream until the very end before serving.

Canned coconut milk does some funny things in the slow cooker (speaking from experience…) so to keep your soup from looking curdled, make sure that you don’t add the coconut milk/cream until after cooking.

How to cook chowder in the slow cooker

I tested this chicken corn chowder recipe with the shorter cooking time (cooking on high for 3-4 hours), but if you need to cook it on low for 6-8 hours, you can do that, just make sure that to check your potatoes at around 6 hours to make sure that they are soft but not mushy.

How to cook chowder in the Instant Pot

Cooking this chowder in the Instant Pot/pressure cooker eliminates an extra cooking pan (you don’t have to cook the chicken in a separate skillet before adding the other ingredients), so this is my favorite way to cook this creamy chowder!

Since this has a lot of liquid, make sure to allow the pressure to release naturally for 30 minutes before doing a quick release. Don’t use the quick release method until after the majority of pressure has dissipated naturally, or your soup will try to come out of your pressure valve.

Variations of our Chicken Corn Chowder

Want to make this recipe even better? After I posted this recipe I made a few other versions for dinner and we hit on an awesome variation of this chowder recipe!

My husband had his gallbladder removed last month, so I worked on making this soup recipe with less fat. I found the new Silk half and half at my local Walmart (it has less fat and calories than canned coconut milk but is still super creamy). It was delicious in the recipe!

If you’d like to make this with corn starch instead of the instant potato flakes, once the soup was cooked in the pressure cooker, scoop out about 1/4 cup of the broth and whisked in 2-3 Tablespoons corn starch (depending on how thick you’d like it), add it back to the soup, then turn the pressure cooker on to sauté/brown setting and heat it up a bit and stir it regularly until it is thickened (about 5 minutes).

Serve this chowder with these great sides: 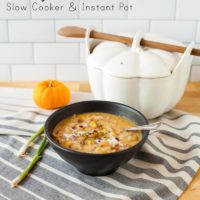 If you’d like to make this with corn starch instead of the instant potato flakes, once the soup was cooked in the pressure cooker, scoop out about 1/4 cup of the broth and whisked in 2-3 Tablespoons corn starch (depending on how thick you’d like it), add it back to the soup, then turn the pressure cooker on to sauté/brown setting and heat it up a bit and stir it regularly until it is thickened (about 5 minutes).